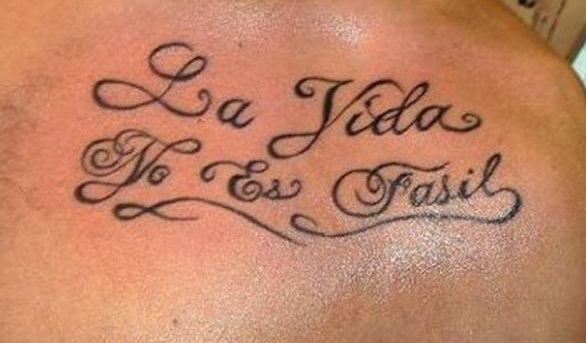 The value of writing well, idiot

There is an image on social networks, the one that accompanies this post, whose origin I have not been able to find, but that allows me to illustrate in a lapidary way the importance of writing without orthographic errors.

Today, social networks have become the first letter of introduction for both individuals and companies. From the moment we write something and this goes from the scope of the private to the public, the style and the correction of the writing become a trait of credibility and social prestige, essential factors if we want to win and maintain the respect of who reads us in every virtual community.

Images and texts are combined on the Internet, and if it is true that the first are worth more than a thousand words, it is no less that, if we read a well written and a poorly written opinion, we grant more credibility (even professionalism, depending on who has written it) to the first, regardless of knowing or not its author. Moreover, as the author is someone known, the image we had of him/her so far may worsen, because we will think he/she is not careful and that, just because he/she is who he/she is, we will not excuse him/her.

Even further, if we talk about texts that refer to products or services written without the necessary spelling and style correction, not only will it prevent us from being able to read the text in a fluid way and focusing our attention on the content, but, and more importantly, this lack of correction will clearly influence the quality perceived by potential buyers of those services or products.

Internet, a sea full of rocks

If surfing the Internet were to do it in the sea, the autopilot would be totally useless before the amount of reefs and shoals we would find in our path. This is the Internet: you do not have to surf a long time to run into authentic language attacks.

In fact, a few years ago, the name “hoygan” was coined on the Internet to name those who inserted their comments and opinions displaying a despicable spelling and a total lack of manners. The word comes from the phrase “Hoygan (instead of “oigan”), necesito allude urjente por un problema en mi ordenador“. Often the lack of respect of these people writing on the Internet is usually the reflection of the one they have outside of it.

We have already mentioned that writing well requires knowing the orthographic rules, but also knowing how to adapt our style to the circumstances: we do not speak the same way among friends as in a work meeting. The context determines the tone and style of our language: we will not write the same way on Facebook as on LinkedIn, or on Twitter as on WhatsApp. Intelligence and ability is knowing how to adapt to each context; making misspellings is ignorance. A very different thing is to abbreviate and condense words in chats or SMS, something pertinent to the specific writing of these media.

The use of the language is linked to the human being. New media can condition the way we write. The different platforms and virtual spaces where we can share information, communicate, demand different levels of discourse. Who is aware of writing for someone knows that today you write something on the Internet and almost automatically it is read by thousands of people around the world. He/she also knows that if he/she takes care of how things are said, he/she can make his/her content more effective and preserve or improve his credibility and image. In any case, the problem is not the Network, but education.

It is said that people read less and less. This, instead of leading us to shorten the words and phrases bordering on the hieroglyphic interpretation, should lead us to sharpen the wit and give us the chance to seek the precise terms, striving to synthesize and find ways to avoid uncontrolled verbiage.

Nor can we see as intruders in the written language icons and symbols such as the pad (#), or emoticons built using punctuation marks, such as “:)”, universally recognized and recognizable. On the contrary, they enrich the written language and are a further sign that evolution also affects language: in the Middle Ages the incunabula were full of abbreviations because the papyrus was expensive and scarce.

In an interview García Márquez said “the first thing to write well on the Internet is to write well“. If those who face the empty screen take into account the respect that their readers deserve, and that with it they show a part of themselves, surely they will be more careful, regardless of the media or platform they use for that communication.

Finally, I will point out the two essential types of correction:

-. The orthotypographical correction is the linguistic correction that corrects both orthographic errors (spelling mistakes) and typography errors in a text (accentuation and punctuation failures, appropriate and pertinent use of capitals, italics, quotes, abbreviations, possible syntactic errors, etc.).

-. The style correction focuses on the syntactic, grammatical and expressive planes to polish the text in such a way that maximizes its expressive richness and adequately conveys the content. It is in the field of literary correction, and thus, it deals not so much with errors that affect the norm as with the style itself. Often the author himself does not detect them because he/she is too familiar with his/her work. Among others, we can find concordance faults, repetitions, ambiguities, verb tenses with dislocated uses, etc.

A good orthotypographical and style correction should preserve, above all, the original style of the author, without masking it or “overcorrecting” it in excess, for that reason its purpose will always be to try to eliminate imperfections and highlight the virtues of his/her writing.